We will read Shirat Hayam (The Song of the Sea, also called Az Yashir, for the first two words) on Friday.  Shirat Hayam is written in the Torah unlike other columns. 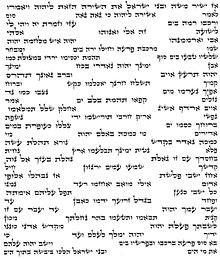 Do you ever wonder what Shirat Hayam is written in the Torah differently?

I will tell you.

The format of the writing of the song of is done in a specific halachic traditional way.  The Talmud refers to it as, “Empty space upon a brick and a brick upon empty space.”

At the splitting of the Sea of Reeds when the natural flow of water was suspended so that the Israelites were able to travel through the split walls.  In essence, the word “mayim” (water) needed to be eliminated from wherever the waters split. The blank spaces in the Az Yashir represent the concept of the elimination of “mayim.”

You will notice in the Torah the last line of Az Yashir, the word “hayam,” meaning the sea, is in the right and left edges of the column.  The two “hayams” embrace the words “u-vnei Yisrael holchu va-yabashah b’toch,” meaning “the children of Israel went along the dry land between.”  The Torah paints the story in words.