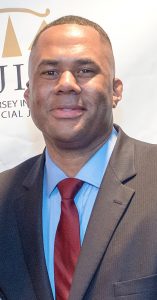 Ryan P. Haygood, a nationally respected civil rights lawyer, is President and CEO of the New Jersey Institute for Social Justice, where he leads a majority-women of color team of racial justice advocates whose cutting-edge work – powered by grassroots organizing, research, writing, policy and legislative advocacy, and litigation – seeks to build reparative systems that create wealth, justice and power for Black, Latina/Latino and other people of color in New Jersey.

Under Ryan’s leadership, the Institute’s advocacy has led to historic racial justice successes in New Jersey including the historic restoration of the vote to 83,000 people on probation and parole and the end of prison-based gerrymandering for state legislative redistricting.

Prior to leading the Institute, Ryan served as Deputy Director of Litigation at the NAACP Legal Defense & Educational Fund, Inc. (LDF), where he worked for more than a decade. At LDF, Ryan litigated some of the most important civil rights cases of our time, including defending the Voting Rights Act before the Supreme Court.