High Holiday Letter for the Year 5781

Your congregation’s creativity, resilience, and commitment to helping others have enabled this institution’s forward movement through the nation’s health crisis.  With Zoom technology we haven’t missed a beat in holding Shabbat and holiday services.  In fact, we have broadened our reach.  In addition to our regular minyan, there are members who would not normally attend weekly services in person: Howard Haberman, whose grandparents were co-founders of the shul, joins us weekly from San Francisco, Adam Zipkin, a key aide to Senator Booker, from Washington, Harold Kravis and Susan Zweibel participate from Central and South Jersey, Shira Hallel leyns Torah from Kearny and Gideon Kantorowitch from Union and Israel, Richard and Cathy Miller join from Newton, Linda Forgosh and Paula Gottesman worship from Morristown, Evonne Goldman from Edison, and Fred Grabiner chants Shacharit and Linda sometimes Musaf, from Florida.  President and CEO Eric Freedman has driven prayer books and chumashim to all who have asked, and others have downloaded the Sim Shalom prayerbook gratis through our membership in the United Synagogue of Conservative Judaism.

The facemask you’re receiving with this letter is an Ahavas Sholom creation—our accountant/secretary, Christine Piatkowski, came up with the idea early in the pandemic, and she and her family have sewn more than 5,000 of these, financed by the Congregation, which Eric has delivered to St. Michael’s and Morristown Memorial Hospitals, the Newark Police clergy, the Newark Health Department, Newark Homeless Services, Integrity House, the Newark-based drug treatment center and other organizations serving needy populations.

We sent two shipments of food to our sister congregation of the Abayudaya community in Uganda, which is struggling from the health and economic effects of the pandemic.   Eric and Isabela assembled boxes of food, toys and continued pay for our housekeeper, Edit Sekpa, and her two-year-old son, originally from the Central African Republic, but who now live in a New York homeless shelter near Kennedy airport.

Our ecumenical Dr. Martin Luther King celebration in January, co-sponsored by the Jewish Museum of New Jersey and NJPAC’s Community Engagement arm, featured Orthodox Rabbi Shais Rishon a/k/a MaNishtana, a New York-based African-American, who was raised Chabad-Lubavitch. Rabbi Rishon re-examined the alliance of African-Americans and Jews during the civil rights era of the 1960’s, challenging us to go much further today. The audience was then treated to the enchanting premiere performance of the musical drama “Firebird: The Early Life of Sarah Vaughn,” commissioned and presented by NJPAC’s Center of Arts Education, depicting the teenage Sarah Vaughan, whose gospel training took place three blocks north of the synagogue at Mt. Zion Baptist Church.

The alliance that Eric Freedman has built with NJPAC CEO John Schreiber and Donna Walker-Kuhne has emblazoned the congregation and the Jewish Museum of New Jersey on the cultural map of Newark and accordingly was touted in NJPAC’s annual report. This was the fifth year we provided a venue for NJPAC’s James Moody Jazz Festival, held each November.  This year featured the Wells Fargo Jazz for Teens Orchestra with Bobby Sanabria, and the opening of the Museum’s exhibit, “Ed Berger, The Jazz Photographs: A Brief Retrospective,” curated by Janice Greenberg and congregant Matt Gosser.  Donations raised at the event supported the Russell Moy/Ahavas Sholom NJPAC Jazz for Teens Scholarship created by congregant Marianne Moy in memory of her musician husband.  The Congregation also co-sponsored with the Rutgers Institute of Jazz Studies the performance and discussion, “Two Pianos Playing for Life,” a re-creation of an extraordinary concert by two young Jewish women held in Leipzig in 1935.

Each year at this time we highlight the congregation’s milestones. We mourn the passing of the witty Herman Friedman of South Orange, once a minyan member and then a High Holiday regular, who mentored many young Jewish campers.  We also highlight the simchas: Congratulations to Nick Scott-Hearn on his graduation from UNC Chapel Hill and new job as a researcher at the University of Chicago. Army first lieutenants Bruce and Katty Zwieben have been deployed to the Middle East and we include them weekly in our Shabbat prayers for the military.

Because many in our congregation are older or have health issues, it is clear that your safety dictates High Holiday services be entirely remote via Zoom.  Rabbi Rosenbach, Houshmand Delshad, Fred Grabiner, Dubra Shenker, Jeff Haveson, Josh Delshad, Steve Yoselevitch and Eric Freedman have been meeting to plan the services.  We’ll forgo an appearance by last year’s newly-formed choir (unlike the Israel Philharmonic Orchestra, Fred doesn’t feel we have the capacity to computer-synthesize their individual parts).  But with that exception, and with some editing and trimming of the service, you will have a front row seat right in your living room, and you’ll have the ability to take a break, if needed, without disturbing anyone.  And you needn’t miss High Holiday kibitzing with friends thanks to the private “chat” feature of Zoom.

You must be on our e-mail list to obtain the Zoom links to our High Holiday services.  If you are not, you must register online at http://ahavassholom.org/home/membership  or complete the enclosed registration form and mail in by September 14.

To take part in the High Holidays, you may borrow machzorim by picking them up from Eric in the synagogue parking lot on either Sept. 8 or 13, from noon to 3:00 p.m., and if you can, please bring canned food for us to donate to the food pantry when you make your pick-up.

The very nice feature about Zoom is that if you choose video, you get to see and be seen as a member of this vibrant eclectic Jewish community.  In fact, what I have found special about Ahavas Sholom, is that just by showing up–in normal times in person but in these times on a computer screen–you contribute to making and perpetuating a vibrant, eclectic, diverse and committed community of Jews centered in Newark.

If you received the snail mail version of this letter, you also received two tickets for these “virtual” services, on which are printed the times of services.  No one will be turned away as you log in to each of the holiday Zoom sessions, but we urge you to pay for these virtual tickets in the same way you have done each year.  Our Congregation’s budget relies on membership dues, ticket sales and the other specific contributions enumerated in the enclosed registration form.

Please keep your level of giving at least at last year’s level.  Even if you never attend, your financial support sustains the voice of Judaism in Newark.  Please return the enclosed form or fill out the digital version of the form with payment through Paypal at http://ahavassholom.org/home/membership. 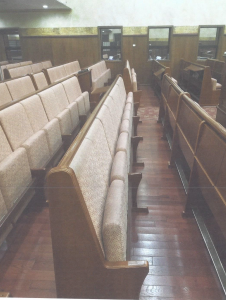 When life returns to normal and you are able to attend in person, you will find your actual seat, far from being virtual, will have a luxurious cushion, wider width and even a pull-down reading table, all in beautiful wood. Please thank Executive Committee member Joan Podnos, who researched new seating and made a connection to Congregation Aish Kodesh in Woodmere, Long Island, which is renovating its synagogue and has donated these pews to Ahavas Sholom.  Installation will take place this fall.

Our annual congregational meeting will take place Tuesday, November 10, at 7:15pm, via Zoom.  Thank you all, stay safe and Zoom with us for the High Holidays.