The Torah portion this week is Balak, famous for the story of the talking ass.  Balak, the king of Moab, hires Bilaam, a genuine seer, to curse the Israelites.  On the way to meet the princes of Moab, Bilaam’s ass stopped abruptly, because the ass saw an angel in the middle of the road.  Bilaam did not see the angel, and he was angry when the ass stopped walking.  Bilaam beat the ass with Bilaam’s staff, and ass complained:  “What have I done to you that you have beaten me these three times?”  There follows a brief conversation between the ass and Bilaam, and the angel allowed Bilaam to see the angel.

Rembrandt van Rijn painted the encounter between the ass and Bilaam with angel in 1625. 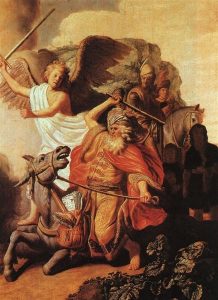