This week’s Torah portion, Vayyakhel, closes Chapter 35 by Moses saying to the Israelites, God has singled out Bezalel to be the chief designer of the Tabernacle.  I searched artists or artistry in the Talmud, and my search led me to contemporary artists who illustrate the discussions in the Talmud, and then led me to one woman, Jacqueline Nicholls.

I never heard of Jacqueline Nicholls (that’s not surprising), but she lives in England, and she is an adherent of the concept called daf yomi.  Daf yomi, literally “a page a day,” is a method of Talmud study where you study one page of day, starting from Tractate Berachot and ending with Tractate Niddah.  The cycle is complete in just over seven years.

Nicholls was struck by the thought that the Talmud includes everything, but it does not include everyone.  She observed that the Talmud is a conversation between male scholars, assuming the reader is an able-bodied, heterosexual male.

Using her art, Nichols draws her comments on the Talmud text.  When you look at her drawings, you see that she disrupts the male-oriented Talmud perspective.  The Talmud (Tractate Kiddushin 2), for example, discusses how a woman can be acquired (married):  by a contract, by money, or by sex.  In response, Nicholls drew a bill (a unit of currency) depicting a gagged woman.  The inscription on the bill is, “And even though she is willing, there’s no talking, no giving, just silent, and receiving.” 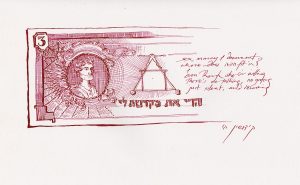 Another drawing is in reaction to Tractate Kiddushin 9: 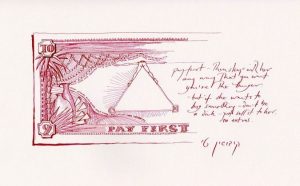 The caption, in part, is “Pay first – Then sleep with her any way that you want.  You’re the buyer.”

Nicholls brings a fresh perspective to the Talmud, a perspective that someone outside looking in can only bring.