In 1987, we took a family vacation to four National Parks:  Grand Canyon, Arches, Petrified Forest, and Mesa Verde.  Mesa Verde is the only National Park dedicated to people.  If you have not been there (southwest corner of Colorado), you should go.  Mesa Verde exemplifies the apartment buildings that the Ancestral Pueblo people built.  The whole area is riven by canyons, and the canyons formed a series of cliffs.  The cliffs were home to mammoth caves, and the Ancestral Pueblo people (formerly called Anasazi), over the centuries, built apartment buildings of the caves.  This photograph depicts what is now called the Cliff House. 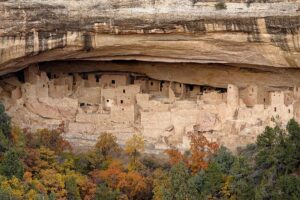 The Ancestral Pueblo people settled in roughly at 550 c.e., and they built the apartment buildings starting at 1200 c.e.  They left one hundred years later.

They farmed the top of mesas, about 50 feet above the caves.  A park ranger told us they moved because the soil was depleted, shattering my image of Native Americans as ecology minded.  That brings me to the Shmitah year, which is described in the week’s Torah portion, B’har.

Crop rotation was practiced by farmers in ancient Rome, Greece and China.  Ancient Middle Eastern Farmers rotated crops as early as 6000 b.c.e.  Crop rotations improve soil tilth, reduce pest, weed and disease pressure and increase biodiversity on the farm. By varying the crops planted in the same field season to season, farmers can improve soil tilth (the physical condition of the soil as it relates to plant growth).  Different plants have diverse root shapes and sizes that can improve the chemical, physical and biological structure of the soil in a variety of ways.

Whatever the Shmitah year was, it was a good farming procedure, to allow the nutrients to return the soil.  The Torah spins the seven-year cycle as God’s mandate, analogizing it to the seventh day of the week as the day of rest.